The biggest issue so far with kubuntu is it suboptimal language support, at least compared to regular Ubuntu. Luckily, it's very easy to add full Ubuntu-like support for non English languages by doing a small gnome-detour.

In a Konsole, run the following commands:

With the gnome-language-selector you can now configure the additional languages you wish to use. 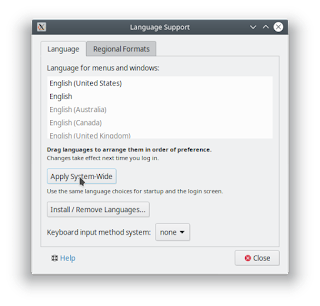 If you don't like the additional gnome dependencies, you can uninstall the gnome-language-selector package afterwards. Kubuntu has also a command line alternative, but I didn't test it by myself:

One last issue I had is that the Konsole (actually Bash) language was somehow set to French. Apparently, Bash is confused when the LANGUAGE environment variable has multiple elements. Start the KDE "Language" application and make sure you have only one "Preferred Language" set. 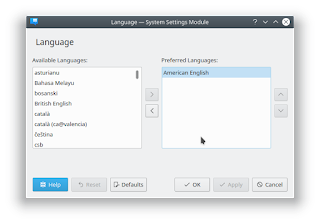 In the terminal you can check if LANGUAGE has only a single language: