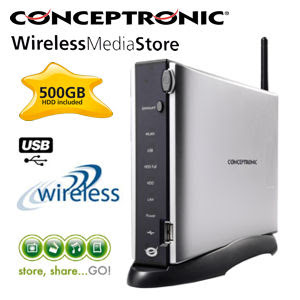 One month ago, I bought a Conceptronic WiFi 500 GB Grab'n'Go Wireless Media Store (CH3WNAS) at about 130 EUR. This is cheap if you look at the features and compare it with other NAS-devices.

I found a few minor glitches in the device. Those are not blocking in my case:The good news is that the CH3WNAS is a linux-device! There are a lot of tweaks out there:
The DSM-G600 appears to be a very similar device to the CH3WNAS. That's a good start for interesting hacks:
I'm considering installing gentoo (under chroot) and Firefly, or better(?) MediaTomb. Those look like a killer-solution. --> next blog :-)
Posted by Michaël at 20:15

I'm not very positive about this device. With me the back up software only backups files and filders where the windeos 'Everyone' account has right. And afterwards it is not possible to remove these backups form the storage devices, because you don't have the right to remove these files! The device fails to connect to the LAN properly if you turn it off and on again. I have to restart my router otherwise nothing happens. Connecting to the UPnP-server is something I have given up after trying for a day.
And if you need to store files larger than 4 GB, don't buy this device.

have the CH3WNAS now for a week, and all works fine with firmware 1.06, the same to the upnp server.
Only problem is the e-mail alert function, here i always got failure message.

hi, I'm novel to this tech science but still I'd like to build a home network and being able to access my files while not at home using the Grab'n'Go server funcionality and for this reason I'd like to download the english complete guide from the manufacturer website you invite check out but there I can't find a link to click to do so.
I work in an electronic and household appliances store and we (they) sell this item for about 200 euro.
But how can I find it at a price comparable to the one you paid?
Sorry for this venial participation.

will this NAS act as a wireless CLIENT while connected to cable lan too?

Some of my experiences:
The fan makes it a bad soundig music instrument.
No sleep mode available for hardisk, The Disk runs until it dies, so look at the other comments for shutdown and restart.
Poor documentation, no way to fina a way to reset the IP adress to any default, see also original post.
IDE drives are expensive, you'll get another NAS completze wit drive and double capacity for the same price.
DLNA does not works with every client (Sony TV won't work).
So i will throw my CH3WNAS out of the window, is there anybody to catch it?